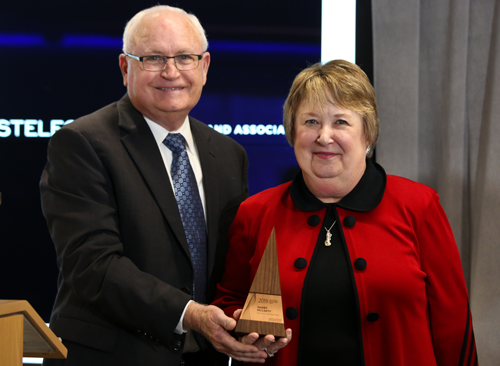 ELLETTSVILLE, Indiana – Joining other national broadband figures such as Federal Communications Commission (FCC) Chairman Ajit Pai, Smithville Chairman and CEO Darby A. McCarty was named as an inaugural 2019 Broadband Hero by USTelecom for her continued work in “making distinguished and game-changing contributions to connect communities,” according to Jonathan Spalter, USTelecom President and CEO.

During the award presentation, Jack Keen, CEO of the Western New Mexico Telephone Company, noted that Ms. McCarty “has grown Smithville into Indiana’s largest independent telecommunications company and has been named a Top 100 National Broadband Company for an unprecedented 11 years in a row.”

He added that “While Smithville is locally owned, Darby is nationally recognized – she is a respected voice at USTelecom, and her insights are central to shaping the association’s vision for our connected future.” He went on to note that Ms. McCarty is “first and often most forceful in promoting smart [broadband] policies and investing in deploying fiber.”

“Darby’s relentless commitment to excellence has earned well-deserved national recognition from industry professionals, which also reflects her continued strong leadership in the broadband industry here in Indiana,” said Paul Quick, Smithville President. “With a history of making private investments upwards of a quarter of a billion dollars in the Hoosier state, Darby and Smithville hold a long and positive history of championing and advancing broadband throughout Indiana, and we look forward to elevating transformational digital connectivity even further.”

The October 24 awards ceremony in Washington, D.C. was part of the USTelecom 2019 Broadband Investment Forum, which brought together leading national policy makers, business leaders and analysts to assess the opportunities and challenges of connecting communities through continued investment in broadband infrastructure and innovation.

USTelecom is the national trade association representing technology providers, innovators, suppliers, and manufacturers committed to connecting the world through the power of broadband. For more information, visit www.ustelecom.org.