After turning on the network for its first residential customers in 2016, Smithville also built a 100-gigabit core network node for commercial growth in the Jasper area.

JASPER, Indiana – Smithville, a national top 100 broadband company, turned on its final fiberhood in the city of Jasper in August, bringing fiber construction to a close for its $15 million fiber overbuild project, according to Darby McCarty, Chairman and CEO. The citywide project brings symmetrical gigabit connectivity (up to 1,000 Mbps download and upload speed) to businesses and residents and the network – which includes a 100-gigabit core network node – “will benefit the people of Jasper for many years to come,” McCarty said.

“We promised in our formal announcement of the project in 2015 that we would deliver a transformational network with gigabit speed, and we have achieved that,” she added. Smithville divided the construction segments in Jasper into 27 separate “fiberhoods.” The first residential customers on the new Smithville network were turned on in 2016.

“Smithville has proven to be a great partner for the people and businesses of Jasper,” said Mayor Dean Vonderheide of Jasper. “Their state-of-the-art fiber network and commitment to the community has created many new opportunities for the city.”  The Mayor added that he is aware of a number of new Jasper residents who specifically relocated to the city because of the availability of high-speed fiber connectivity.

Unlike many other fiber civic overbuild projects in Indiana, Smithville did not receive any taxpayer funds or TIF district funding for the Jasper project, which began construction in 2015.

“We first started working in Jasper in 2008, when we built the foundation of a business fiber network to serve corporations there,” said Cullen McCarty, Smithville executive vice president. “When the opportunity came to first provide fiber services for selected Jasper government facilities and then expand that project to a citywide overbuild, we chose to make a substantial investment in the community.”

The Jasper project represents a long-term strategic focus of expansion for Smithville. “Just as we did in Jasper and as we’re doing with cooperative expansion projects with REMCs in Indiana, we continue to review and identify new opportunities for fiber builds,” he added. “Fiber availability represents a critical element of strategic infrastructure and a platform for economic growth of our communities, which we will continue to support.”

Smithville conducted extensive engineering and other plans before beginning residential fiber construction in 2015. Both the discovery of bedrock limestone in construction zones and the restrictions imposed on construction during the 2020 Covid-19 year contributed to delays in the citywide project. “Despite some unexpected major challenges, we were able to forge ahead,” said Cullen McCarty.

“We in Jasper are grateful that Smithville has made a huge investment in Jasper, both in their physical network and in the community support that they have made, especially during the recent COVID-19 lockdown crisis when high-speed broadband availability was critical,” said Mayor Vonderheide.

The Mayor added that Smithville helped provide “critical connectivity for area schools when they started up virtual education programs during the lockdown.” Mayor Vonderheide said that he knew of instances where family members visiting from New York City to Jasper had to remain in Jasper when New York went into lockdown. “Because of the availability of Smithville’s high-speed fiber, they were able to successfully work remotely in Jasper with no problems,” he explained.

Today, new fiber from Smithville is available to more than 7,500 homes, businesses and facilities in Jasper, and more than 3,000 residents have subscribed. “We have gone from basically zero to providing close to 50% of Jasper residents with high-speed fiber, which is a testimony to the quality of Smithville service in a competitive market,” said Melissa Wright, who serves as project manager for the Jasper overbuild.

The 100-gigabit core network node that Smithville built as part of the project also provides a “significant advantage for businesses present and future in Jasper,” said Paul Quick, President of Smithville. “The high-capacity node – which typically is only found in large urban areas like Chicago or Indianapolis – gives Jasper and Dubois County a major strategic advantage in attracting Big Data and AI-related industry for future economic development,” he added. “The city and county are now very well positioned for virtually any company in the information economy.”

Smithville plans a citywide celebration of the completion of the project on Sunday, September 26. “During construction of the fiber project we conducted a number of ‘Fiber Fun Fairs’ for the community to let them know what we were doing and provide information about the advantages of fiber,” said Wright. “Now we’d like to close out construction with a final ‘Fiber Fun Fair’ on September 26 to celebrate the citywide availability of high-speed connectivity.”  More details will be forthcoming, she said.

Cullen McCarty said Smithville was appreciative of the new community relationships formed during the project, especially those with former Mayor Terry Seitz (now a staff leader with U.S. Senator Mike Braun) and current Mayor Vonderheide. “Both Mayors have provided great leadership and support as we have moved forward, together with many others in the city,” he said.

“Back in 2015 we said we were ‘ready to go to work’ to bring transformational fiber to a region that generally only had very moderate service previously,” said McCarty. “We fulfilled that commitment and now we’re ready to provide Jasper with a new generation of service that will help elevate quality of life and bring new opportunities.” 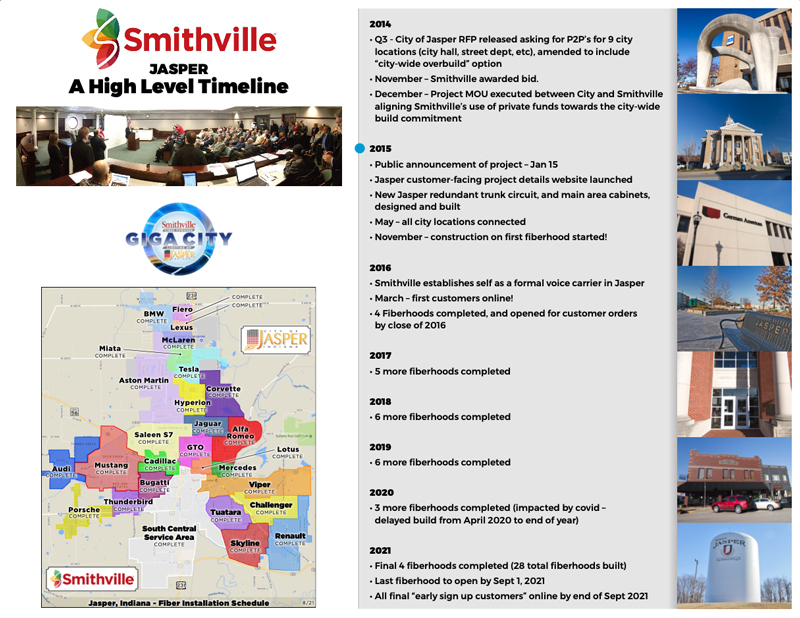