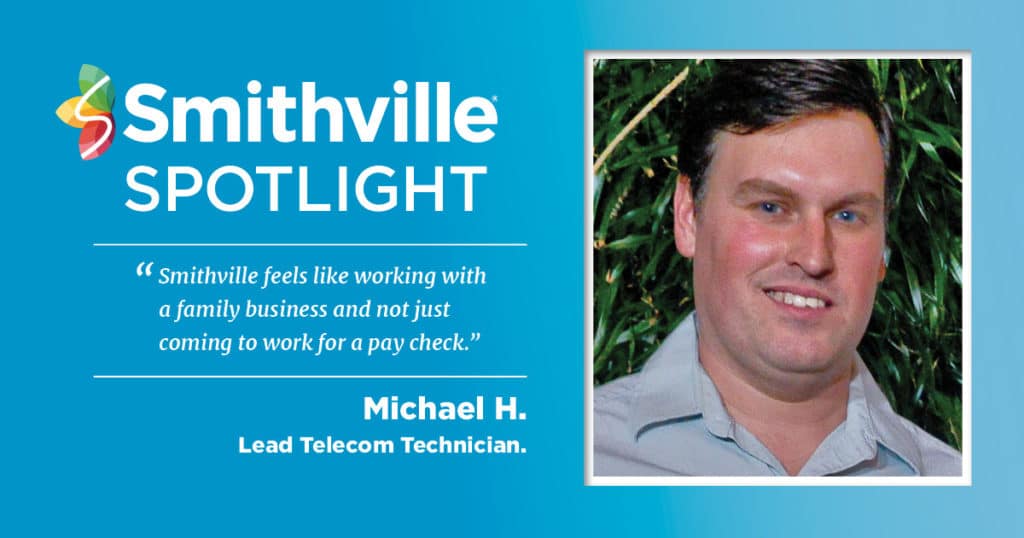 Michael H. came to Smithville in 2016 with extensive telecommunications experience. He had a desire for a career that was rewarding at a place where it was fun to go to work. Nearly four years later, he’s found that and more and was honored with a prestigious employee-nominated award at Smithville’s annual award dinner.

Before we learned about his background and skills, we asked some hard-hitting questions:

Michael started working in the telecommunications industry with Nortel Networks in the late 1990s. After their bankruptcy he worked at Toyota Manufacturing in Princeton, IN. While the money was good, he was looking for something more rewarding in other ways and looked to get back into the telecommunications industry. “I started looking into telecommunications again and looked at several different companies all over the country. Then I found a Telecom position in Jasper for Smithville. I must admit I was caught off guard that a family business in telecommunications had such a large reach in Indiana with the latest technology available. I had spent a lot of years working in Indiana with Nortel but never crossed paths with this company. I talked to my wife about the position and we searched the town of Jasper to see what could be offered to our kids. After looking, we knew this was a direction we both wanted to take our family.”

A normal day for Michael involves making sure customers get connected to our service in an efficient manner. He often assists other technicians to help make the customer’s installation appointment go quicker. He understands that customers are the reason we come to work each day and makes it his mission to ensure a great customer experience. These efforts and dedication have not gone unnoticed.

Each year, Smithville holds an annual awards dinner to recognize the hard work of Smithville employees. In addition to honoring those with milestone service anniversaries, employees nominate coworkers for three Champion awards. Michael was nominated by three coworkers, and won the 2019 Above & Beyond Champion award, which he says is the biggest thing he’s accomplished since joining Smithville. To better understand the impact Michael has made at Smithville, here’s part of his nomination from a coworker:

“Michael consistently goes above and beyond to do the best for the Smithville Team and our Customers. He is the first one to volunteer help to his peers and the first one to sacrifice his time when trouble arises. He is always on the lookout for potential issues that might cause a customer to be upset. He then is proactive and will address them to find a solution. He makes sure he is in communication with the customer and whatever department he thinks may be able to ease the situation. When there is an absence, he picks up extra work before his Supervisor or Manager has a chance to ask. Michael on many occasions has brought attention to areas that can help the sales team with potential leads. It is common for Michael to come in on a Monday and pass along things that he has seen over the weekend to make the Team more efficient or to help us stay a step ahead of the competitors. In a lot of ways, it has just become the norm for Michael to go the extra mile.”

The dedication and passion he exhibits each day definitely shows how he goes above and beyond. This award meant so much to Michael because it was nominated for and selected by fellow coworkers. That feeling of family, in addition to new growth opportunities, has led Michael to recommend others look into Smithville. “Anyone has the opportunity to do more at Smithville if they choose.”