Skip to content
Smithville may collect your email address via cookies and pixels on the Website through the use of trusted third-party partners. These partners may combine your email information with other information they have access to such as mailing address so that Smithville may serve relevant marketing offers to you via direct mail. If you do not want Smithville to collect information about you, please contact Smithville Customer Service to opt out. 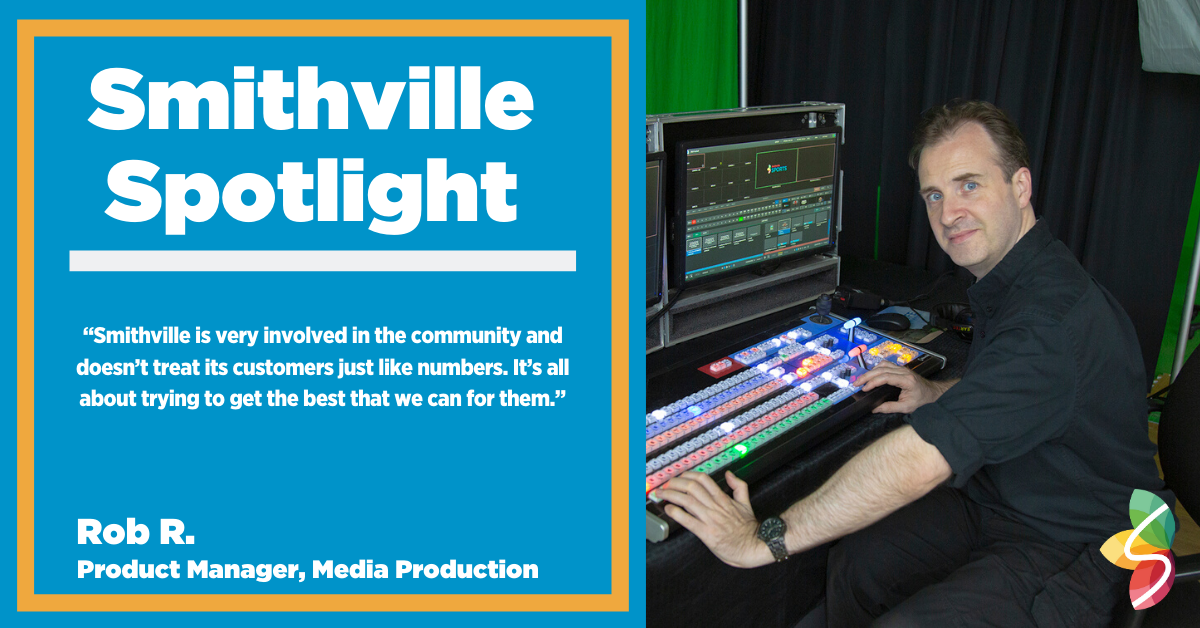 Before we talk about how he came to Smithville we asked some very important questions to get to know Rob better:

Rob started out in the entertainment business interviewing film and music stars in London, England and streaming them online over a 56k dial up connection. He moved to the United States in 2003 and in 2006 he joined Smithville’s Marketing Department. A couple of years later he began producing local features and documentaries and broadcasting live high school sports. Now he heads up Smithville Media and, in addition to producing content for Smithville’s Youtube channel, he’s offering video production services to the local community.

One constant throughout his time at Smithville has been change. It’s been a big jump from videos on dial up connections to today’s super-fast fiber optics. “I’ve seen the company grow and change in many ways. As well as an increase in the number of staff, the technology at Smithville has changed from mainly a copper-based service to high-speed fiber, with many other product lines and services added as well.”

Growth and personal development are important for Rob as he has had a huge impact on over 50 interns who have helped produce, film, and edit local sporting events and features over the years. He’s been able to share his knowledge and has witnessed their own personal growth, with many interns currently working in New York City and Los Angeles. Internships at Smithville allow students to practice and hone their skills while building up a portfolio of work. “It’s kind of like paying it forward. And that kind of giving back is what Smithville is all about.”

Community involvement also means a lot to Rob and he’s represented Smithville well at various events. He has helped to film and produce high school graduations, Bloomington Chamber of Commerce events like Educator of the Year and annual meetings, and local sporting events. He also appreciates the level of customer service we provide and that we’re a family-owned company helping local Hoosiers. “Smithville is very involved in the community and doesn’t treat its customers just like numbers. It’s all about trying to get the best that we can for them.”

Rob recently began offering his extensive experience and expertise to local businesses. Most businesses think video production has to be expensive, but Rob can work with local businesses to find the right package for the right price. Smithville Media can do it all, including commercial, interview, documentary, and training video production, live broadcasts, and editing services. The Media team also has the latest technology available, including multi-cameras for large shoots, green screen capabilities, a full-service studio, and professional recording booth. Take a look at some of Rob’s work at Youtube.com/SmithvilleMedia and reach out by calling 812-935-2284 or email media@smithville.com. He’s happy to discuss your project and find the perfect solution.

This article was posted in Uncategorized. Bookmark the permalink. Follow comments with the RSS feed for this post.Post a Comment or leave a trackback: Trackback URL.